Kick the Pain Away 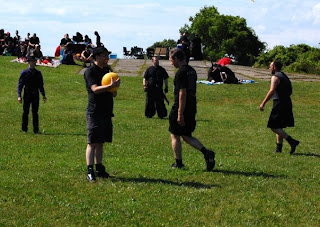 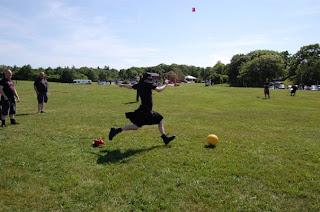 Gothiness: 6 Sweatiness: 8
There's long been a terrible dearth of Goths in sport, who knows why? Maybe their darkness gives them an unfair psychological advantage over the opposition, maybe long poetry writing sessions render them useless to physical activity, maybe their minds are on higher things such as Snakebite & Black consumption. Whatever the reason, DeHuman8 and his dark followers are redressing that imbalance by braving the Daystar to reach the peak of Goth endurance: 90 minutes with no shade against the Grand Society of Water Rats All Star Charity and Daytime Chat Show Presenters Second 11. Watch out dark ones - that Phillip Schofield's a fouling bastard! Our Nightmare Team of choice has to be:
Attack: Astbury, Ian / McCulloch, Ian / Reznor, Trent
Midfield: Duffy, Billy / Sioux, Siouxsie / Sensible (Capt.)
Defence: Scabies, Rat / Murphy, Pete / Hussey, Wayne / Cave, Nick
Goal: Smith, Robert
Manager: Eldritch, Andrew
Injured: Edwards, Richey / Curbain, Kurt (on loan from Grunge United) / Curtis, Ian
Discuss...

Capt. Sensible is far too cheery a guy to play on that team. Maybe you could get Trent Reznor to substitute?

I couldn't agree more. I see Trent as midfield enforcer. And I'd have Pete Murphy and Jaz Coleman in there as well.

I can't believe no-one got my Captain Sensible joke. I workshopped that joke for 6 months.

All right, Reznor's in but only due to injury (not self-injury you understand, that would rule him out). We'll try him up front though, we need his speed to outpace Ricki Lake.

The Captain called. He said "Wot?"

I got your "sensible" joke (and I chuckled), but I'd have put "Sensible, Capt (capt.)" personally. You have to really hammer the joke home sometimes, I find.

this is the first time I've ever laughed at a Richey joke! thanks x

I once saw Smith, Robert playing football with his,umm, "roadies" in New Zealand. I also sat near Siouxsie on the 227 bus, but that is just gratuitous name dropping and nothing to do with football.

LOL. That's kickball at Goth Fly-a-kite! Even wussier than soccer.

A lack of goths in sport? You clear have never heard of roller derby.