Want to know a little about me? This article was recently written by the very kind Jennifer Chen at Evil Monito. Until such time as I can get around to writing something more personal, this will have to suffice!

I generally don’t like the Q&A style. It’s kind of slacker-y, like picking up a turkey from Boston Market for the family Thanksgiving dinner. But sometimes Q&A is the best way to preserve genius, which is what I consider Tom Lenham, the British creator of the Goths In Hot Weather© blog, where photos of eye-catching Goths are rated according to “Gothiness” and “Sweatiness” (more explanation below). And like Boston Market turkeys, Lenham is really quite delightful.
Where on earth did you get the idea for Goths in Hot Weather?
I’ve joked with my friends for years about how I’d like to do a site about how Goths suffer so much in the sun, so one day I just decided to do it, and it seems to have entertained a lot of people so far. I used to be a Goth and remember struggling ‘round Camden Market in London during the 80’s with a full-length coat, fedora hat and Cuban heel cowboy boots on in the mid-summer and cringe at what I must have looked like, but at the time I thought I was the coolest thing on the planet – youth does that to you, I suppose! I’m quite interested in the juxtaposition of traditional scenes being interrupted by unconventional imagery and alternative lifestyles, such as a Goth dressed in rubber and leather sitting on a beach building a sandcastle. I think it does two things: for one thing it makes us question our moral values and judgments based on appearance rather than behavior. For another, it’s fucking funny to laugh at. 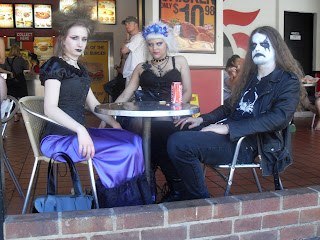 Lenham captioned this photograph "Unhappy Meal."
What are some of the identifiable criteria used in determining “Gothiness” and “Sweatiness”?
That all depends on the shot. It’s not just about a hot day, it could be quite overcast or even inside, but if the subject is wearing a full leather coat and lace skirts, then they’re going to push the sweatiness rating up. Makeup has a big influence, all that face paint can’t be comfortable!

You seem very mysterious. It’s hard to find out much about the brains behind this operation – who is Tom Lenham? Tell me a little bit about yourself.
Well, I suppose I should write something enigmatic here, but I’m a fairly normal person. I’ve been a Goth, a rocker, and a disco freak amongst other things. These days I carry around a little more funk than I used to, but I like to think I can still pimp myself up now and then! I’m a father now (god, that’s tiring) so I don’t have a great deal of time for hanging out, but being an ex-theatre director and stage manager (mainly musicals in the West End dahling), I still like a bit of showbiz – and deep down I’m your standard attention whore so Goths In Hot Weather’s success has been a real delight. It’s incredibly flattering to know people appreciate its humor, so I get warm and fuzzy every time I log on, even if some of the comments are pedantic to say the least!

How would you describe the Goth scene in England? Do you get a lot of U.S. photos? Are most photographs local to yourself? Do you have a photographer who shoots for this website?
Goth and alternative culture is, in my view, much more accepted in the States than in the U.K. Over here, it’s very much a subculture with its own scene and hangouts, although there are many subdivisions within it (never call an Industrialist a Goth!). Goths in London are only seen rushing from one gothy place to another – they rarely stop in between. In America (and also mainland Europe) it seems that people are better at taking smaller elements of all sorts of cultures and combining them as part of the general social milieu. I suppose that says something about the mentality of British people and the nature of Island Races, unwilling to accept anything other than their own point of view. But I may be wrong – I’m no anthropologist; mostly I just like laughing at people in leather trousers.

When the site started, it was very U.K.-centric, but now about 80% of the views come from America and Canada, so I’ve tried to be inclusive without losing that wry sense of Britishness. The shots come in from all over the world – quite a lot from Germany (big Goth scene there) and Spain, but probably half the shots I use are from the U.K., plus of course I shoot quite a few myself. The best thing about it has been the journey it’s taken with submissions; first of all, people would just write in with comments, then they started sending in shots they found on the net. Now they’re actually seeing people in the street, thinking of the site, and taking a shot specifically to send me, which is really great – or at least it would be if they managed to get a shot froim the front rather than sneakily snapping someone’s back as they walk away. Next step is to persuade people to actually meet up and pose for bespoke shoots…

What is a Didi-Goth?
I get asked this a lot. I believe in the States they’re referred to as Gothlings or Kindergoths, but basically it’s a young or trainee Goth who hasn’t gone the whole way yet – definition below:

Didi-Goth /gɒθ/ [after Diddy] – noun
1. one of a Teutonic people who in the 3rd to 5th centuries invaded and settled in parts of the Roman Empire, but left after two weeks as their visa had expired.
2. A young or fledgling Goth, too depressed to consider him/herself part of the rest of school, but too happy to become fully immersed in Goth culture. Writes particularly awful poetry, usually about how no one understands them, or why the boy in class won’t go out with them.

Origin:
bef. 900; ME Gothe (after G. Chaucer): “There was a Wif of Bathe, she was-a gat toothed and prood, black did she wear, and depressive; yet Goth she was-a not, morever a Didi, owning nought but one Cure album, and that alone being a Greateste-Hits.”

Which photos are your favorite, and why?
I like them all – I’m pretty strict with what I post, if I don’t laugh out loud when I see it, then I don’t put it up there. I really like the Indestructigoths shot, because it’s just so out there – two people in full gear on a classic British sea front. I’m also a big fan of Queen of the Sunshine Goths – she’s about as close to a poster-girl for the site as you can get, with the ice cream and crazy hair. The comments about her were also a real surprise, a lot of people found her really attractive, which I think is brilliant. That shot really set the tone for the website, in fact – it’s all about poking fun, but within an affectionate and respectful environment. I definitely don’t want the site to be vitriolic or abusive, as I have a genuine affection for my subject matter. Having said that, Flock of SeaGoths is just great – he couldn’t be more clichéd if he tried!

Tom Lenham is the creator of Goths In Hot Weather©, as well as an executive television producer. He can be reached at gothsinhotweather@gmail.com.