Closer to Goth Than Thee 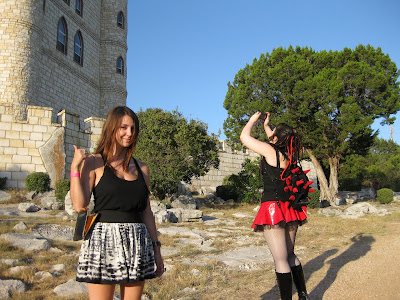 Gothiness: 8 Sweatiness: 5
Molly writes "I'm in this photo, and I am not goth, but this girl is goooood. She was rollin kinda deep, but I liked her the best. I think it was the spiky mini backpack." And she's right. She's also at the vanguard of a new trend I've been noticing: many of you are sending in photos grabbed opportunistically when in the presence of Goth, and I love 'em - so I have a new challenge for you: If you are vanilla, send me pics of you standing next to hot goths, preferably with thumbs aloft (as so ably demonstrated by Molly here). If you are Goth (and I bow to you my dark masters), then I need pics of you standing next to the most incongrous item or person you can find - old grannies, police officers, dwarves. In fact, extra points for dwarves.
9 comments:

Between a Rock and a Goth Place

Thanks to Amanda Martin 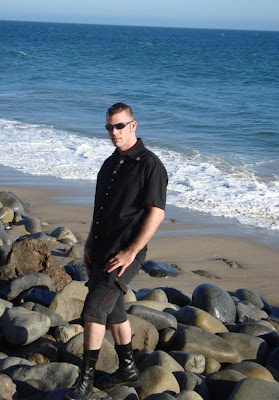 Gothiness: 5 Sweatiness: 8
Amanda writes "Here is a picture of my brother. Make fun of him."
Too easy a target, from the 18 hole DMs right up to the mohawk-crop circa 1992, not to mention the fact you're on a BEACH. I open the floor to you, dear reader. Do your worst!
15 comments:

Thanks to Jillian Venters 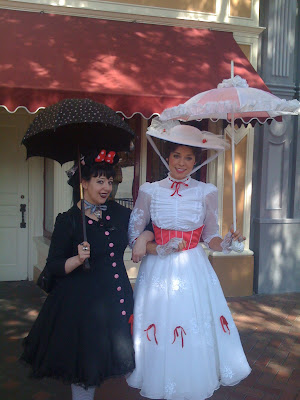 Gothiness: 7 Sweatiness: 6
One of these ladies is a fully paid up Goth (the lovely author of Gothic Charm School, no less!). The other is Mary Poppins. They both look like they could use a drink.
10 comments: 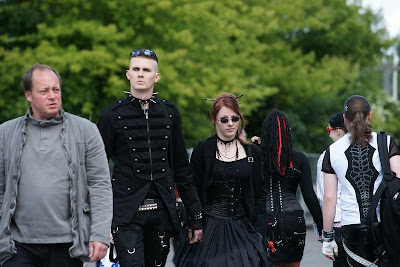 Gothiness: 5 Sweatiness: 7
Um, yeah, so thanks for the lift and everything, dad, but could you, like, leave now? I see some of my friends over there...
10 comments: 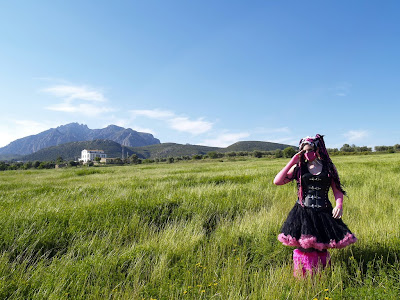 Gothiness: 8 Sweatiness: 6
Like a Goth version of a Windows wallpaper, BloodyDoll proudly tempts us to click around her desktop. Watch out though - treat her bad and you'll get the BSOD! (black screen of darkness in this case)
5 comments: 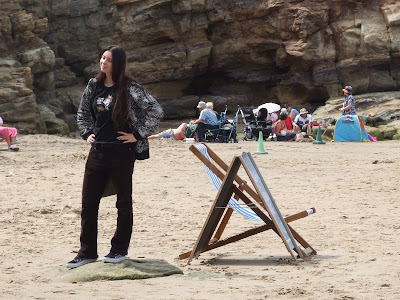 Gothiness: 4 Sweatiness: 6
Though clearly not yet fully initiated into the coven of Goth, this young lady is going the right away about spending time on the beach. There's a nice welcoming deckchair - does she sit on it? Does she buggery! She even has the good sense to stand on the only rock on the beach rather than risk getting sand in her Vans. Well done, madam.
6 comments: 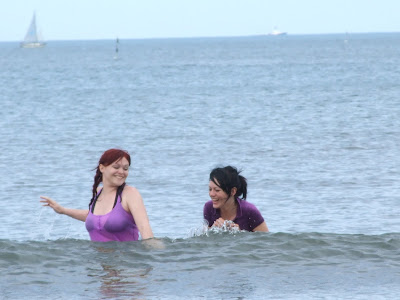 Gothiness: 6 Sweatiness: -4
It was a hot day, but a freezing sea. These two Dark Delights jumped in and before they knew it they were overwhelmed by the Goth's biggest fear: enjoyment. Yes, you can clearly see these these two Gothettes are having fun. How dare they? I made up for it by finding a previously unpublished poem, penned by Samuel Taylor Coleridge. Apparently he binned this one and went with the Rime of the Ancient Mariner instead.
"Oh! Sea of chilly suffering, I jump in thee,
To drown my sorrows, at the shores of Whitby.
To look so glum was my goal,
but instead, childish enjoyment filled my soul.
I am Goth, 'neath the searing sky
I feed my pain with fish and chips from the Magpie."
4 comments: 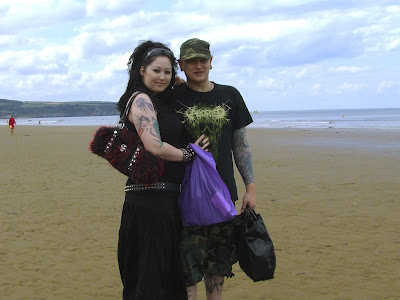 Gothiness: 9 Sweatiness: 7
Birthday Goth and her boyfriend here were kind enough to actually pose when I accosted them in Whitby Beach, spiritual home of the Goth. A big expanse of beach, bright sunshine, donkey rides, everyone else in t-shirts, and these two don't just Goth out, they even have the attention to detail to make sure their plastic bags are black and purple! It takes a lot of work to find a shop that hands out purple plastic bags - fine work Gothette. She even represents when paddling. Mind you, the North Sea is bloody freezing. 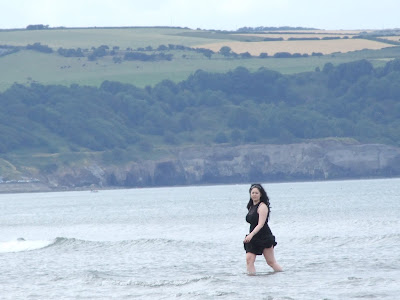 Come Feast at the Bitter BBQ of Banishment 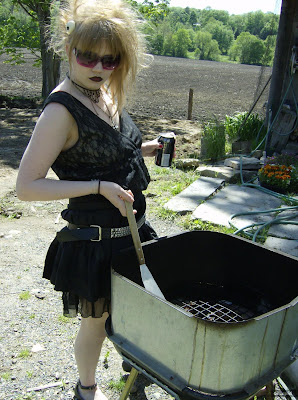 Gothiness: 7 Sweatiness: 6
Take heed mortal, and fear my warning! Tear your eyes from the alluring glare of this Dark Temptress! Heed not the cool, refreshing can of beer and refuse the promise of delicious pre-prepared kebabs with artichoke hearts from M&S! You can plainly see there's nothing on this fire - like the Dread Pirate Roberts, this evil succubus waits to barbecue your SOOOUUUUULLLLL! Probably in a nice piri-piri sauce.
9 comments: