Karen O is a Goth


As if you needed convincing, feast your eyes on the Yeah Yeah Yeahs 'Skeletons' - they came up with the idea for this video while they were checking out GiHW, trust me :)
4 comments:

stolen from a frankly superb looking wedding in Russia 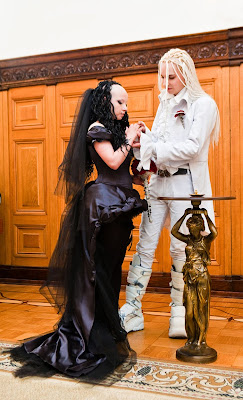 Gothiness: 9 Sweatiness: 8 (under the collar)
I've had had a request from ITV which gives me the excuse to finally post one of these great images of full-on Gothy nuptials action. Hard working Nina Clement is looking for a Goth couple who are getting married to shoot for their Living TV show, Four Weddings. I'm guessing it has something to do with weddings. She wants couples who are getting married in Feb / March this year (don't blame Nina for the short notice, production cycles are getting worse and worse, in my day we had 6 years to research and we didn't have no internet, plus we shot on real video not that mini DV crap, kids these days etc etc). If you fit the bill, let me know and I'll pass you along to Nina. Hey, at least your wedding video should be in focus.
p.s. Frankly, Nina doesn't seem too bothered whether you're Goth or not. she just needs someone getting married! soon! help!
9 comments:

Thanks to Marc McAndrews 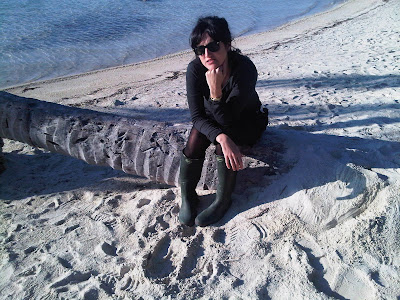 Gothiness: 7 Sweatiness: 9 (around the toes)
No, madam, no. You're on a beautiful Caribbean beach, sitting on the trunk of a palm tree pretending to be Robinson Crusoe. You do not need wellies. What do you think this is? A fucking festival? Dissapointing behaviour, Gothette.
4 comments:

thanks to Sociopathic Kitty 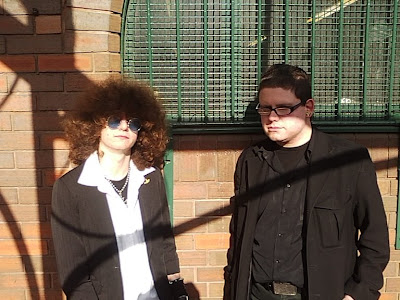 Gothiness: 5 Sweatiness: 6
All right guys, joke's over. Who told them they look good dressed like this? It must have been one of you.
3 comments:

Gothiness: 9 Sweatiness: 6
So, the festive cheer of the non-demononational holiday period has been and gone, and the burning question on your lips is this: what is the Goth-about-town wearing this season? Fear not, darkling, I can confidently predict the demise of the Gothasol (though as you can see, some tradgoth diehards are clinging on to yesteryear's look). Goths and Gothettes, I give you.. THE GOTHWING. Or fan as some might call it. The Impressive Clergyman calls it a gothwing, and who are we to doubt the word of a trend forecaster such as he? The contextual usage, he tells me, should be thus; " I was up that Camden Market recently and spotted Lauren Laverne fanning her face with a rather fetching Victorian lace Gothwing." Get in touch with your local Gothic outfitter now!